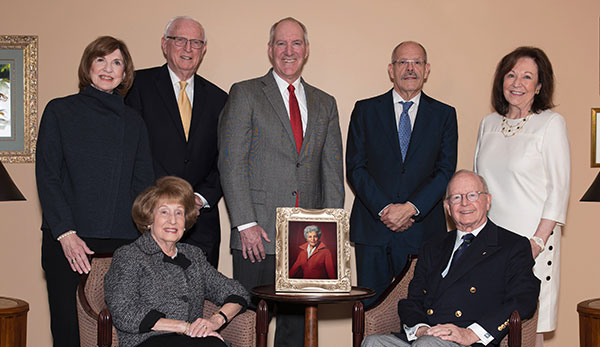 Jim Bruner has been active in civic, political, and professional leadership roles in the Greater Phoenix community for over 50 years.

Currently he is a Trustee of Virginia G. Piper Charitable Trust and a Board Member of the McCormick-Stillman Railroad Park in Scottsdale.

Politically he was elected for two terms to both the Scottsdale City Council and the Maricopa County Board of Supervisors. While serving as founding Chairman of the Maricopa County Stadium District he was instrumental in developing the plan to stabilize the Cactus League and in obtaining a Major League Baseball franchise and stadium for Arizona.

A member of the State Bar of both Iowa and Arizona, he has practiced law with the law firm of Snell & Wilmer. Other professional activities include serving as Chairman and President of Northern Trust Bank and with service to several other financial institutions. He is now retired.

He is a veteran having served on active duty as a Captain in the U. S. Air Force.

José Cárdenas, senior vice president and general counsel of Arizona State University, joined the Board of Trustees in March 2005. Mr. Cárdenas serves on a number of other boards, including Southwest Gas Corporation, The Center for the Future of Arizona, Meridian Bank, Xico, Inc., the Translational Genomics Research Institute (TGen), and the ASU Foundation.

Paul Critchfield, nephew of Virginia Galvin Piper, has devoted over 52 years of leadership and service to corporate human relations and development with a range of organizations including Motorola, Inc., Ramada Inns, Disneyland, Scottsdale Healthcare (now HonorHealth), and the Boys & Girls Clubs of Scottsdale.

In 1999, he retired as Executive Director of the Foundation of the Boys & Girls Clubs of Scottsdale (now the Boys & Girls Clubs of Greater Scottsdale) to begin his lifetime administrative Trustee work with Virginia G. Piper Charitable Trust. Mr. Critchfield‘s many board positions and service to local charities have included board secretary of the FBI Citizens Academy, alumni member of the Sheriff’s Posse in Maricopa County, former member of the Scottsdale Rotary Club (30 years), and life member of the Scottsdale Charros (the volunteer public relations “arm” of the City of Scottsdale). In 1974, he received the Chief’s 50 Award at the Pentagon for distinguished service in the Army National Guard recruitment program.

Born in Chicago, Mr. Critchfield graduated from the University of Tampa, Florida. Mr. Critchfield and his wife Claudia reside in Arizona. Of great importance to them, together they provide service to others as they carry out their Knighthood duties with the Equestrian Order of the Holy Sepulchre of Jerusalem for the past 20 years. He and his wife have also served together in many other charities in Maricopa County for more than 35 years.

Piper Trust is deeply saddened by the loss of beloved Trustee, colleague, and friend Art DeCabooter, who passed away on October 8, 2019. He will be greatly missed. Art DeCabooter held leadership roles in numerous clubs and organizations, including the Scottsdale Area Chamber of Commerce, Scottsdale Rotary Club, the Scottsdale Charros, Arizona Town Hall, Community Celebrating Diversity, and Scottsdale Historymakers. At the national level, Dr. DeCabooter was a member of the board of directors of the National Catholic Educational Association, the Commissions and Councils of Catholic Education, and the National Association of Boards. He was a president of Scottsdale Community College (served from 1978 to 2008) and held degrees from St. Gregory’s Junior College, St. John’s University, and Indiana University.

Laura Grafman, a very close friend of Virginia Piper’s, has been a Phoenix resident for over 35 years. She served as executive vice president HonorHealth Foundation (formerly Scottsdale Healthcare Foundation) for more than three decades. Her professional activities include membership in the Association of Fundraising Professionals from which she received the Fundraising Executive of the Year Award and also served on its board of directors. Laura is also a member of the Association for Healthcare Philanthropy. She serves on the boards of the Scottsdale Center for the Performing Arts, Scottsdale Arts (Scottsdale Cultural Council), the Board of Overseers of the Phoenix Symphony, and is a founding member of Friends of the Foundation for Senior Living. A native of Chicago, Mrs. Grafman attended Grinnell College and the School of the Art Institute of Chicago.

Sharon Harper is Chairman and CEO of Plaza Companies, one of Arizona’s premiere real estate firms specializing in medical, bioscience, and commercial facilities, mixed use development, and innovative senior housing. Her strategic leadership activities include trustee chairman for Arizona State University, trustee for Creighton University, past chair and board member for Greater Phoenix Economic Council and Greater Phoenix Leadership, board member for Arizona Commerce Authority, Banner Health Foundation and TGen, past Honorary Commander of Luke Air Force Base, and various leadership roles in political campaigns. A native of Mankato, Minnesota, Ms. Harper graduated from Creighton University in Omaha, Nebraska.

Judy served as the first President and CEO of Piper Trust, and in 2012, she was appointed a Trustee. Before joining the Trust she was president of Goucher College in Baltimore. An American historian by training, she was also on the faculty and in the administration at Southern Methodist University. She was a former board chair and board member of Encore.org, and has served on the boards of the Council on Foundations, Arizona Grantmakers Forum, Greater Phoenix Leadership, and Baltimore Community Foundation. She was a presidential appointee to the Board of Visitors of the United States Naval Academy. She volunteers at Hospice of the Valley in bereavement support and pet therapy. Dr. Mohraz earned her PhD from the University of Illinois at Urbana-Champaign and her BA and MA from Baylor University.

Steve Zabilski has served as the Society of St. Vincent de Paul’s chief executive officer since 1997. Prior positions include senior vice president with Transamerica Insurance Group and audit manager for the accounting firm KPMG LLC. Mr. Zabilski is a member of the board of trustees for Great Hearts Academies, the finance committee for the Catholic Community Foundation, and the Human Services Campus, LLC. He is a member of the Order of the Holy Sepulcher, the Order of Malta and Legatus, the American Institute of Certified Public Accountants, Phoenix Community Alliance, and the FBI Citizen’s Academy. He is past president of the board of trustees of Ville de Marie Academy and has served on a number of school and parish advisory councils.

Jeffrey L. Coles is Professor of Finance and the David Eccles Chair at the David Eccles School of Business, University of Utah. Previously he has held teaching positions at the University of Rochester, Stanford University, and Arizona State University. Dr. Coles has advised both industry and government. Scientific consulting clients and partners include Institutional Shareholder Services, Utah Power and Light, the Utah State Department of Community Affairs, Arizona Public Service, the U. S. Department of Energy, The Directors’ Council, PricewaterhouseCoopers, Pinnacle West Capital, Central Newspapers, Inc., Honeywell, Gradient Analytics, and Verus Research. He served as Co-Chief Scientist of Incentive Lab and serves as an expert in legal actions for Stinson Morrison Hecker LLP, Werner & Ayers, LLP, and Gibbs & Bruns, LLP. Dr. Coles has served or also serves as a director on the boards of the Financial Management Association and the Western Finance Association; on the steering committee of the Arizona Chapter of the National Association of Corporate Directors; on the investment committees of the ASU Foundation and ASU; on the awards committee of the Financial Executives Institute; and has been elected president of the Financial Management Association. Dr. Coles earned his doctorate degree from Stanford University and a bachelor’s degree from Pomona College.

Jacque Millard joined Intermountain Healthcare in 1993.  As its vice president and chief investment officer, she is responsible for investment portfolio management, cash management for all Intermountain entities, and for oversight of Intermountain’s external investment managers. Previously, she spent five years with Blue Cross and Blue Shield of Utah as manager of cost, budgets, and investments and worked at Workers Compensation Fund of Utah as an investment manager. Ms. Millard’s professional affiliations include the Utah Treasury Management Association, Association for Financial Professionals, Association for Investment Management & Research, and the Salt Lake Society of Financial Analysts. She was a member of the Westminster College endowment investment committee for twenty years, the U.S. Bank of Utah Advisory Board, and the board of directors for the Health Care Credit Union.  She currently serves on the investment committee for Dignity Health (formerly Catholic Healthcare West). Ms. Millard is a Certified Cash Manager and Chartered Financial Analyst. She earned her bachelor’s degree in finance from Weber State University and master’s degree from Westminster College.

Kent Misener is chief investment officer with Desert Mutual Benefit Administrators (DMBA), managing over $6 billion in assets for various entities associated with the Church of Jesus Christ of Latter-day Saints. He is also the chief investment officer of Crossroads Investment Advisors LLC, a boutique investment advisory firm.  Mr. Misener serves on several corporate boards and committees including the corporate asset and benefits finance investment committees for Intermountain Healthcare, the investment committee for the Community Foundation of Utah, and the board of the CUSO of Deseret First Credit Union. He has served on the boards of ARKONA Inc, as chair of Deseret First Credit Union and on the investment committee of the Utah State Insurance and Reclamation Office. He has appeared as an expert witness concerning market trends and investment returns in state and federal trials. He has also been a guest speaker at national conferences concerning global and national equity markets and has lectured on the benefits of both active and passive investing. Mr. Misener graduated from Utah State University with a Bachelor of Science degree in economics and finance; he obtained his master’s degree from Utah State University.

Frank Brady spent his entire career with Ernst & Young (formerly Ernst & Ernst). He retired from the Phoenix office in 2002. Mr. Brady served on the Arizona State Board of Accountancy nearly 18 years. He was appointed by the Governor to two, five-year terms and served as board president in 1997-1998 and again in 2004-2005. For more than seven years he was a member of the Accounting and Auditing Standards Committee, which he chaired in 1986. In addition to his work with the State Board, Mr. Brady has served on the board of the Arizona Society of CPA’s. His civic activities have included: Catholic Community Foundation board chairman, Boys and Girls Clubs of Metropolitan Phoenix board member, and Arizona College Scholarship Foundation board treasurer.  Mr. Brady graduated from the University of Chicago.