Congratulations to the 2014 Piper Fellows—Jan Dougherty and Vincent VanVleet

December 8, 2014
Virginia G. Piper Charitable Trust is pleased to announce its 2014 Piper Fellows—Jan Dougherty and Vincent VanVleet. The newly selected Fellows, chosen via a competitive process, are dedicated to improving and enriching lives in Maricopa County’s communities. Learn more about them and their fellowship plans.

“It is such an honor to be able to continue my professional growth while directly benefitting a community that I am vested in. I am excited to learn from other Piper Fellows and then share new knowledge and experiences with colleagues in my organization and the greater community.”
– Jan Dougherty, MS, RN, FAAN, Family and Community Services Director, Banner Alzheimer’s Institute

Jan Dougherty has been the Family and Community Services Director for Banner Alzheimer’s Institute since its inception in 2006. She focuses on creating programs that assist individuals affected by Alzheimer’s disease and related dementia, as well as programs that support their family caregivers. Dougherty earned her bachelor’s degree in nursing from Valparaiso University and her master’s degree in gerontological nursing from the University of Arizona.

With the growing global incidence of Alzheimer’s disease, Dougherty will use her sabbatical to study best practices of several healthcare systems that successfully integrate Alzheimer’s disease and dementia care into the primary care model. Site visits include Indiana University’s Primary Care Aging Brain Care program and model programs of the United Kingdom National Health System in England and Scotland. Dougherty will also attend the Executive Program in Social Entrepreneurship at Stanford University; here she will study methods on how to best synthesize her sabbatical experiences in ways to help improve dementia care practices in Arizona. One week will be dedicated to personal reflection.

“Theatre holds life in its hands, brilliantly illuminates its myriad facets, and holds them up for contemplation in new and unexpected ways. It is a feast for the soul and one that feeds my innate desire to be connected to something larger than myself.”
– Vincent VanVleet, Managing Director, Phoenix Theatre

Vincent is celebrating his 17th season with Phoenix Theatre. As Managing Director, he has led the organization toward unprecedented earned revenue growth through the development of a “patron-centric” culture using real-time data capture and analysis. He was a driving force behind the Community Database, currently in use by more than 20 Arizona arts organizations to expand their access to area theatre-goers. He assisted arts and culture venues in the central corridor to elevate brand identity through the creation of the Central Arts District, launched in May 2014. VanVleet received his Bachelor of Arts degree in Acting and Directing at Barat College on Chicago’s North Shore.

In line with Phoenix Theatre’s current focus on growing the number and size of donations it receives, VanVleet’s fellowship will focus on best practices with respect to converting individual transactions into long-term patron relationships. Site visits include Steppenwolf Theatre and Lyric Opera in Chicago, Actors Theatre of Louisville, Milwaukee Rep, and the National Center for Arts Research in Dallas to discuss the use of data in creating patron loyalty. VanVleet will also visit Guthrie Theatre in Minneapolis and Wolf Brown & Associates to learn more about their groundbreaking research on how artistic programming can be used to increase organizational loyalty. He will spend a week at the Edinburgh Fringe Festival viewing new and innovative performances from all over the globe.

About the Piper Fellows Program

The Piper Fellows sabbatical program acknowledges the never-ceasing demands of nonprofit leadership and offers opportunities for Maricopa County leaders to retool, refresh, and renew their skills.

Watch for enhancements to the Piper Fellows program in 2015. 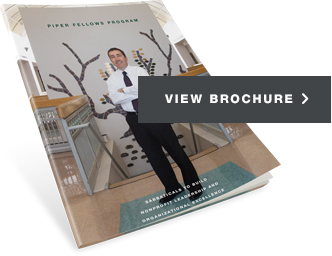