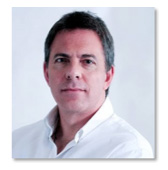 August 1, 2011
The subtitle to Dan Pallotta’s book Uncharitable—How Restraints on Nonprofits Undermine Their Potential—encapsulates the premise of his fresh thinking about the nonprofit sector. The author spoke at an August Piper Academy about how we practice 400-year-old ideas of charity that are at odds with 21st Century realities.

Pallotta believes our society has swallowed whole a set of ideas dating back to the Puritans about doing good that actually ensures less success and prevents real progress for nonprofits.  For example, we accept that employees in the nonprofit sector should make less money than their counterparts in the for-profit world, yet greater compensation for the value they produce could attract more gifted people to solve society’s intractable problems.

“Our logic has been sacrificed to ideology,” says Pallotta. “That which we have been taught is good in us—selflessness, the willingness to deprive ourselves—prevents us from doing real good in the world.

“That which we have been taught should upset our moral compass—profit, capitalism, the free market, the desire for personal material gain—is in fact the fuel that could power stunning change in the world. They could achieve superior outcomes.”

As Pallotta says, “We can have an entirely new generation of philanthropists and still be left with seventeenth-century charity.” Flexible philanthropy, he believes, is giving money with fewer restrictions to allow nonprofits to build infrastructure; funding campaigns to change the donating public’s mind about giving; and investing in venture philanthropy, micro-finance and social enterprises. 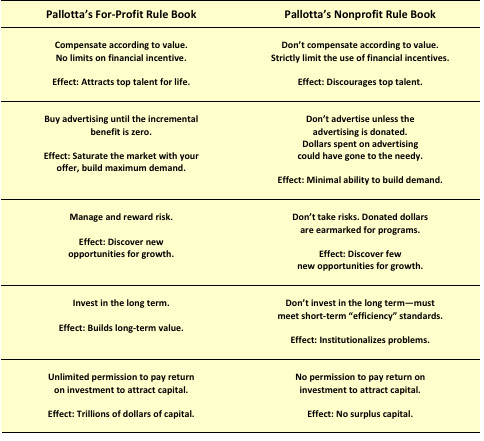