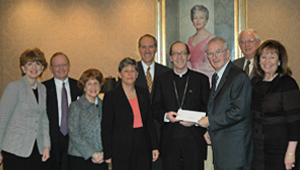 “This significant commitment was very deliberative, with research and planning identifying the most critical health and safety needs at these elementary schools,” said Judy Jolley Mohraz, Ph.D., Piper Trust president and CEO. “Because Virginia Piper was deeply committed to Catholic education in her lifetime, we are pleased to honor her by continuing to make strategic investments to support Catholic schools and opportunities for strong academic and spiritual education.”

Following the independent facility assessment, the Diocese created a list of priority needs for each elementary school. The Piper Board of Trustees decided to fund all priorities in the “critical” category. These items generally cover basic structural and equipment requirements at the school buildings, such as installing proper lighting, safety equipment and heating and cooling systems, and repairing leaking roofs, faulty electrical wiring and outdated plumbing.

“I am grateful for the generosity of The Virginia G. Piper Charitable Trust and the support it expresses for the children who attend Catholic elementary schools in the Diocese of Phoenix,” said the Most Reverend Thomas J. Olmsted, Bishop of the Diocese of Phoenix. “This grant honors the special concern she [Mrs. Piper] had for the educational needs of our children.”
The Trust previously initiated strategic investments for Catholic high schools and preschools in Maricopa County.

About the Roman Catholic Diocese of Phoenix:
The Roman Catholic Diocese of Phoenix was established on December 2, 1969, by Pope Paul VI. The Diocese, which is comprised of 43,967 square miles, includes the counties of Maricopa, Mohave, Yavapai and Coconino (excluding the territorial boundaries of the Navajo Indian Reservation), and also includes the Gila River Indian Reservation in Pinal County. With a registered Catholic population of over 550,000 people, the Diocese encompasses 92 parishes and 24 missions. Twenty-six pre-schools, 29 elementary schools and six high schools in the Diocese serve 15,300 students.