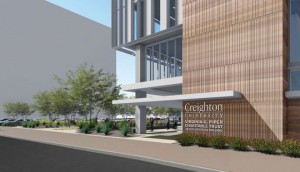 An artist’s rendering shows the planned Creighton University Virginia G. Piper Charitable Trust Health Sciences Building, which is set to be built in Phoenix on the old Park Central Mall property in Phoenix.

A Phoenix-based charity on Monday gave $10 million to Nebraska-based Creighton University to support construction of its Arizona health sciences campus.

The seven-story Creighton University Virginia G. Piper Charitable Trust Health Sciences Building is set to be built in Phoenix on the old Park Central Mall property. It’s on the northwest corner of North Central Avenue and West Catalina Drive, across from the Bank of America building.

The building’s name honors Monday’s gift from the Phoenix-based Virginia G. Piper Charitable Trust, which was established nearly 20 years ago as a legacy of Virginia Galvin Piper. Piper’s first husband, Paul Galvin, was the founder of Motorola.

“It is a transformational gift that really supports the health sciences campus. We are very excited about it,” Creighton president the Rev. Daniel Hendrickson said Monday while he was in Phoenix to receive the donation.

“We get our students from all over the country. And frankly, the key determinant of their success is their desire to serve others,” he said. “That is a key factor in the type of students we accept. We want to develop servant leaders who are going to provide great care to each patient.”

The Jesuit university plans to break ground on its new $99 million 180,000-square-foot Phoenix health sciences building in the fall. The school is scheduled to open its Phoenix program in the fall of 2021 and expects full enrollment by 2025, Creighton officials said Monday.

For the time being, the campus will have one building, though that could change in the future, Creighton leaders said Monday.

The campus will include, among other features, a community center with continuing education opportunities for nonprofit organizations, and a clinical learning center integrating simulation, virtual reality, and technology.

Doctor and nurse shortage in Arizona

The medical school will be a branch of Creighton University in Omaha and for at least the near future will not be a separately accredited medical school, officials said. Its first class in the fall of 2021 is expected to have about 85 students.Eventually, Creighton wants to expand that class size to 120.

Creighton will be the third institution to offer a four-year M.D., also called allopathic medical school program, in the Phoenix area.

The Minnesota-based Mayo Clinic Alix School of Medicine has a campus in Scottsdale that expects to graduate its first class of 50 new allopathic physicians in 2021.

Two other schools — Illinois-based Midwestern and Missouri-based A.T. Still — train future physicians in doctor of osteopathy programs in the Phoenix area. Midwestern University’s Arizona College of Osteopathic Medicine in Glendale has an average medical school class size of 252; and the A.T. Still School of Osteopathic Medicine in Mesa averages a class size of 108 for its graduating physicians.

Arizona is facing growing shortages in most health-care professions, having one primary care doctor for every 1,500 citizens and a projected shortage of 50,000 nurses by 2030.

One of the reasons Creighton University cited for its expansion to Phoenix is a strategic response to the shortage of Arizona health-care professionals.

For more information, Read Article in The Arizona Republic by Stephanie Innes ››.